Billy Stromberg at his Caldwell County home in 2019

In 2014, I interviewed Billy Stromberg when I began the series of biographies on the men and woman from Caldwell County who gave their lives for our country in World War II. His older brother Richard had been killed on New Georgia in 1943 and Billy provided me with recollections and photos of his beloved sibling. At that time, Billy mentioned his own service in the U.S. Army, and I promised I’d get back with him. I finally did, five years later.

I’m thankful I did.

William Pharr Stromberg was born in Caldwell County, Texas on June 27, 1929. He was the ninth and youngest of six boys and three girls of Hjalmar Pharr Stromberg and Ester Mary Ann (Sponberg) Stromberg. The Stromberg children spanned three decades, with Billy’s oldest sibling, Roland arriving in 1905. The Sponberg and Stromberg families were part of a wave of Swedish immigrants arriving in and around the Central Texas area in the 1870s. Many were fleeing famine that struck much of Scandinavia around that time. Most were farmers but there were also many professionals in the group. Billy’s grandfather, Richard Eustachius Stromberg was a pharmacist who for a time worked at Tobin Drug Company on Congress Avenue in Austin. One biographer sums up Billy’s Swedish stock well: They were “good, strong, hard working people.”

The Stromberg family ranched and farmed in the north end of Caldwell County. Billy’s childhood was typical of a farm and ranch kid –lots of hard work. After three years at the tiny Mendoza School, he completed his schooling in Lockhart, taking the school bus ten miles into town every day. He graduated from Lockhart High School in 1947.  Billy was a serious young man, and his love of rural life, of raising and improving livestock came early and continues to this day. Like other young men in his family, he attended Texas A&M. A&M was an all-male military college, and he was assigned to A Company, Quartermaster Corps. His senior year, Cadet Major Stromberg also served as the Supply Officer for the Composite Engineers Regiment.

Like most Aggies, he had a military obligation and requested upon commissioning appointment as a Reserve officer in the U.S. Army Quartermaster Corps.  So did his roommate, Gale Brundrett, from Refugio. Surprisingly, the Army honored their requests. After a sixteen week Quartermaster Officer’s Training course at Ft. Lee, Virginia, the two got lucky again. They were assigned to the 9182nd Technical Service Unit at Fort Reno, Oklahoma in January 1952.

Fort Reno has a colorful history. It was established in 1874 as a military post to protect an Indian agency from marauding tribes during the Red River War. Soon, its role changed, as the Native Americans, mostly Southern Cheyenne and Southern Arapaho, needed protection from Sooners rushing to settled the territory’s Unassigned Lands. The post was abandoned after statehood, but the fort’s Remount Depot remained. The United States Army needed horses for its cavalry up until World War II. The facility was turned over to Oklahoma A&M (now Oklahoma State University) in 1948, but a portion of the post continued to function. Major Lee O. Hill QM, whom Billy remembers well, explained the Remount Depot function in a 1952 Army publication:

The Remount Branch is now engaged in the procurement of horses and mules for Turkey, a sizable percentage of this procurement being comprised of breeding stock. In order to carry out the Foreign Aid Animal Procurement Programs, it has been necessary to activate the animal holding facilities at the former Reno QM Remount Depot, Fort Reno, Okla., where the animals, upon purchase, are sent for processing and conditioning prior to being shipped overseas. Animals shipped under this program have, according to reports, arrived in excellent condition, have measured up to required specifications, and are serving most efficiently the purposes for which they are intended.

Because of his skill with horses, newly minted 2nd Lieutenant Stromberg became part of the United States’ efforts at supplying Turkey, its new strategic partner and an uncomfortable neighbor to Joseph Stalin’s USSR. The Army “bought horses all over the country,” he recalls. Horse traders began filling orders. Animals aged 4 to 8 years were purchased and shipped by train in cars holding twenty-five horses. Upon arrival, they were vaccinated and had their hooves trimmed. To ensure their quality, “we had to ride them.” Billy chuckles when I ask if the animals were good mounts. “They were green broke at best!”

Once the veterinarians cleared the animals, they were loaded on a special train bound for Westwego, a river port across from New Orleans. During the loading process, Lt. Stromberg was billeted at Camp Leroy Johnson, south of Lake Pontchartrain, and several miles from Westwego. “I drove across the old Huey P. Long Bridge many times. Scared the heck out of me. It was narrow and there wasn’t any room for a mistake.”

Eight hundred and six horses were loaded into wooden crates and onto an old Victory ship, the USS Columbia Heights. The horses were stabled in three tiers of stalls: One on deck, one just below deck, and one in the hold. The Army’s contingent of thirty men consisted of officers, mess personnel, enlisted men and a veterinarian. The Army’s job was to ensure the animals’ safe passage to Turkey.

The SS Columbia Heights was originally the World War II Victory-class cargo ship SS Calvin Victory. After decommissioning, in 1950 the freighter was sold to Isbrandsen Company and renamed. It was one of many ships used by the United Nations Relief and Rehabilitation Service and the Brethren Service Committee shipping livestock to countries devastated by World War II. Later, the Brethren Service Committee continued its efforts alone (it continues today as Heifer International).

Loading horses on oceangoing vessels was no easy task. The animals were hoisted aboard. Once loaded, the ship sailed down the Mississippi and out into the Gulf of Mexico. The trip to Turkey took sixteen days. The merchant marine ran the ship. The soldiers and officers cared for the animals. There was a superior officer ostensibly overseeing the shipment.  Lt. Stromberg actually ran the show on the three trips he made as “the fellow stayed in his cabin and slept most of the trip.” The SS Columbia Heights was no cruise ship. The trip over was “aromatic.” The return trip was spent cleaning and sanitizing stalls for other users. During 1952, the Israel Cattle Breeders Association and the Jewish Levinson Brothers of Newport News used the ship for transporting farm animals to the new state of Israel, totally independent from the Heifer Project. *

Billy is rightly proud of his efforts. “I made three trips, each with 806 horses. We only lost one.” While proud of his men’s efforts, he doesn’t have much good to say about some of the merchant marine. “They were a hodgepodge of nationalities and quality.” One probably overdosed and was accorded a burial at sea with full honors.

Billy made three trips on the SS Columbia Heights, alternating with his friend Gale Brundrett. Twice, the port was Iskenderun, and once it was Istanbul. His one regret was sailing up the Bosporus at night and missing some of the sights. During his trips, Billy obtained charts and plotted every day’s progress. He still has them.

Once the ship was in port, there was little time for sightseeing. Turks assisted in offloading the equine cargo as cavalry troops stood by on the dock. Once offloaded, the ship returned to New Orleans. Then the process would begin again.

There was some unintended frivolity on one of Dale Brundrett’s trips. Two merchant marine sailors smuggled on Turkish belly dancers. The newspaper account described the young women as “ballet” dancers, which they weren’t.

Billy made his last trip to Turkey in October and November 1952. The young lieutenant wore many hats.  At one time or another, he was post adjutant, detachment commanding officer, personnel officer, postal officer, Marine Corps stable officer, horseshoe officer, supply officer and fire marshal. You get the picture. There were few officers, and everyone pulled their weight. The Remount Branch also trained horses for funeral processions at Arlington National Cemetery. Billy’s photos include several of the beautiful animals he helped train.

XO-31 bound for duty at Arlington 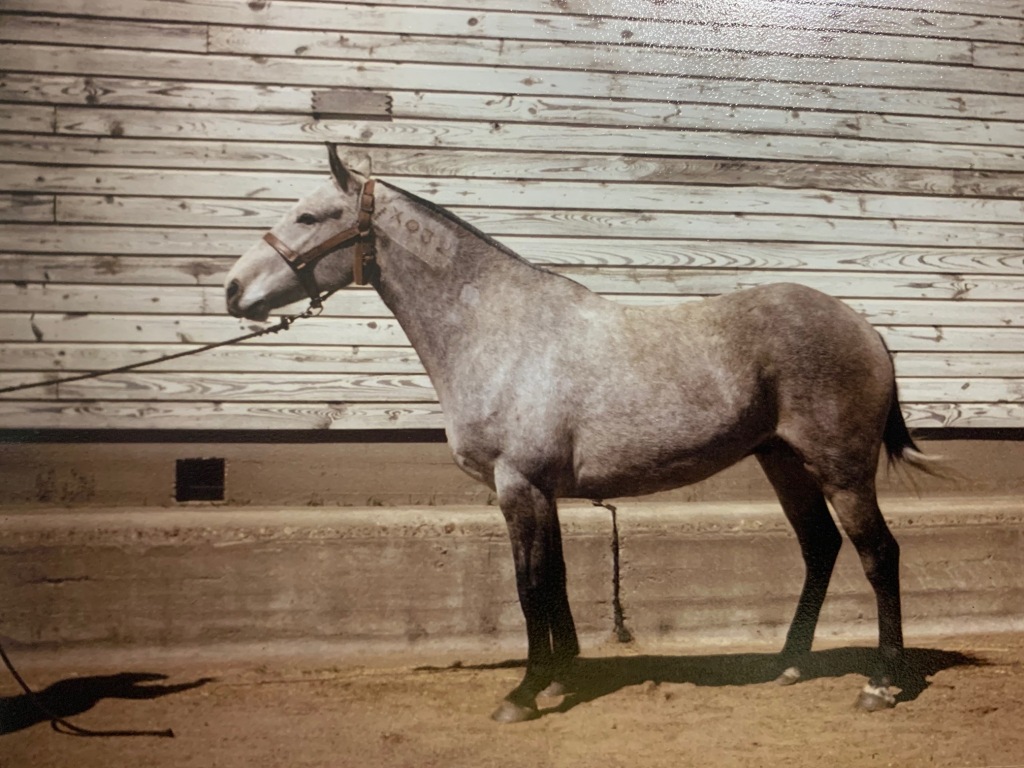 First Lieutenant William Stromberg separated from the active Army in late 1953. He returned to his beloved farm and ranch in Caldwell County.  In 1970, he married Sadie Garner, a speech pathologist originally from Houston County. She retired from Bastrop Independent School District in 2000. Billy and Sadie continue to live in northern Caldwell County.

Billy’s life has been a full one. In addition to ranching and farming, he served as president of Creedmoor-Maha Water Supply Corporation for fifty years. He also served on the board of the Caldwell County Conservation District and the Agricultural Stabilization Board. Billy’s love for Texas A&M is evident. Several years ago, he and Sadie endowed quite a few acres of the Stromberg ranch to his beloved alma mater.

Billy’s keen interest in history and the military are evident at a visit to the Stromberg residence. Along with detailed records of his time in the Army is a collection of artifacts discovered at Fort Reno. A few years ago, he became interested in rifle and pistol cartridges. The items on display, many quite old, are a sight to behold.

If you happen upon Billy and Sadie, perhaps at the grocery store, make sure to give them a “Howdy.” And don’t forget to thank Billy for his service to his country and community.

*For a history on the Seagoing Cowboys, see https://seagoingcowboys.com/