This story, researched by the hard working folks of the Caldwell County Genealogical and Historical Society, appears in the Fall 2018 edition of the award winning Plum Creek Almanac, the Society’s semi-annual publication.

THE NEWSPAPERS OF CALDWELL COUNTY, TEXAS

Almost as soon as Caldwell County was created, attempts began to satisfy its citizens’ thirst for news and opinion, and news publications of various types were begun in various parts of the county. Sadly, newsprint is ephemeral. Many newspapers appeared, and as quickly, disappeared.  Some are known only because of brief comments in other publications of the time. Some publications merged. I suspect that no one got rich in the newspaper business. The hours were long, the printing process tedious, and, like today, the risks of offending the powerful often real. This article is an attempt at listing all newspapers (or similar periodicals) known, or at least suspected, of existing in Caldwell County.

The Lockhart Weekly Post editor’s comments seem to indicate that the Luling Signal and the Luling Enterprise were perhaps in cahoots, or jointly owned.[19] Apparently they weren’t. The Enterprise’s editor groused publicly about subscribers dunning it and jumping to its competitor. In 1902, the Bastrop Advertiser mentioned the paper’s gripes:

There is hardly a newspaper in all Texas that has not often met with the experience of the Luling Enterprise, as expressed in the following: “We notice that the Signal has secured several new subscribers in the past several weeks that once took our paper. What we want to say is that they dead beated us out of money. We hope the Signal will get their money allright and have no such dirty trick played one it.”[20]

The first newspaper in Caldwell [sic] was “The Mirror,” a small weekly which was published by Mrs. Isabel Stewart. She not only conducted editorial department, but she worked in the mechanical department. After a struggle of about one year in a vain effort to maintain “The Mirror,” Mrs. Stewart yielded to the inevitable and removed her printing office to San Diego, California, where she published a paper for several years.[50]

22. Western Clarion, Lockhart, Texas, circa 1855. Publisher – I.G.L. McGehee. Little is know about this publication. The front page of its June 2, 1855 edition shows an impressive effort made at gathering ‘hard’ news. Its editor reported, without negative comment, on an anniversary gathering in New York City of William Garrison’s Anti-Slavery Society, printing the Society’s resolutions condemning the practice of slavery. 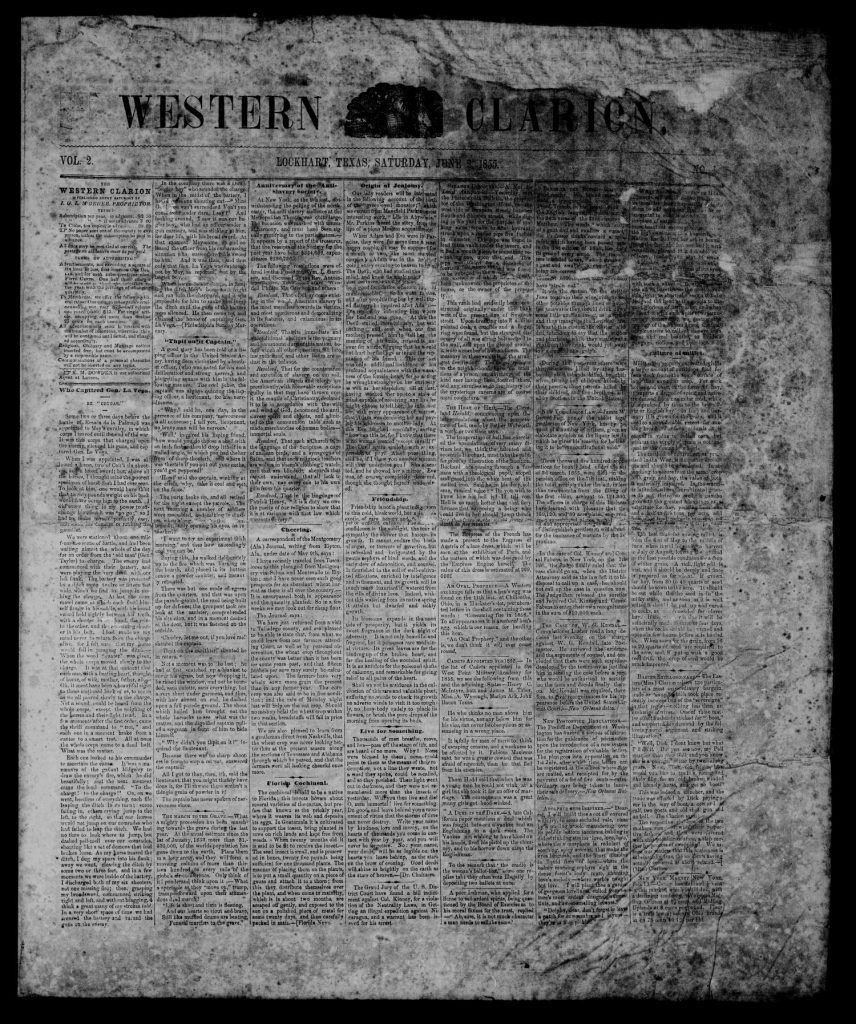 William Carleton, an Englishman, established “The Clarion” [sic], but it didn’t stay in existence long because of a little incident. One night at supper table at his boarding house a drunk man by the name of Compton, who was a carpenter and cabinet maker, got mad at some joking remark Carleton made. Without a word of warning he attacked Carleton and disabled him temporarily. This caused a suspension of the paper, and its publication was never resumed.[55] 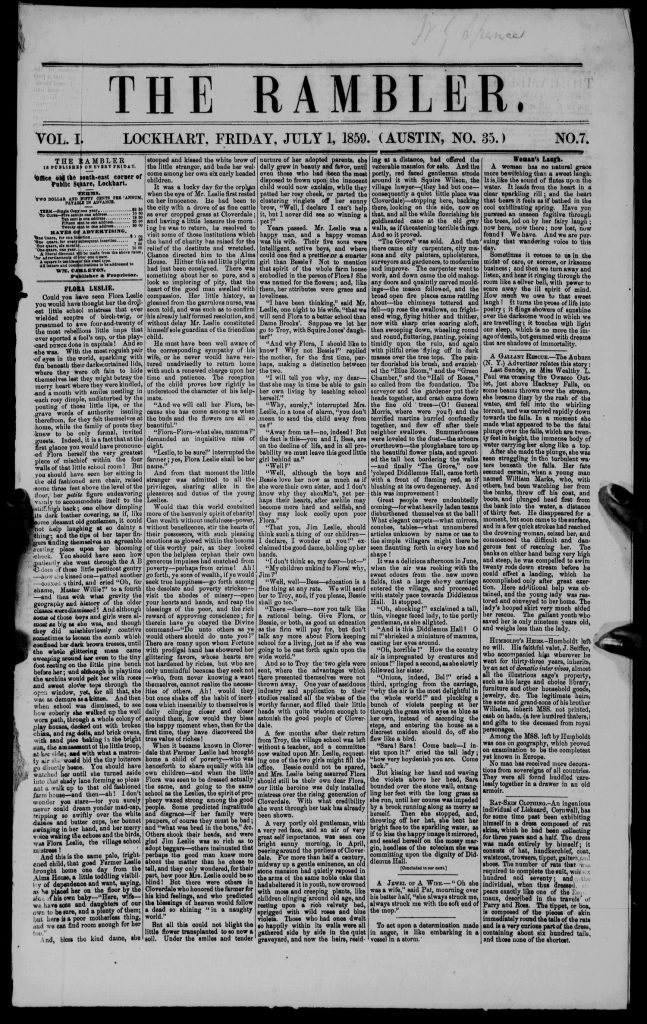 Mr. Raymond, who has been conducting an agricultural journal at  Lockhart, started for Austin to spend Christmas with his family. On arriving at Onion creek, about eight or nine miles from home, it being late in the afternoon and very cold weather, with a sharp north wind, Mr. Raymond complained of cold and alighted to walk with the buggy drove on to the house where he was to stop for the night. An hour elapsed, and his non-arrival causing alarm, he was sought for and found dead in the road but a few paces from the place where he alighted. His death was caused by an attack of neuralgia of the heart, and was probably instantaneous.[65]

Nathaniel Charles Raymond died on December 22, 1870. He was fifty-one years old. He is buried in the Oakwood Cemetery in Austin. His wife, Lucinda, died in 1882. 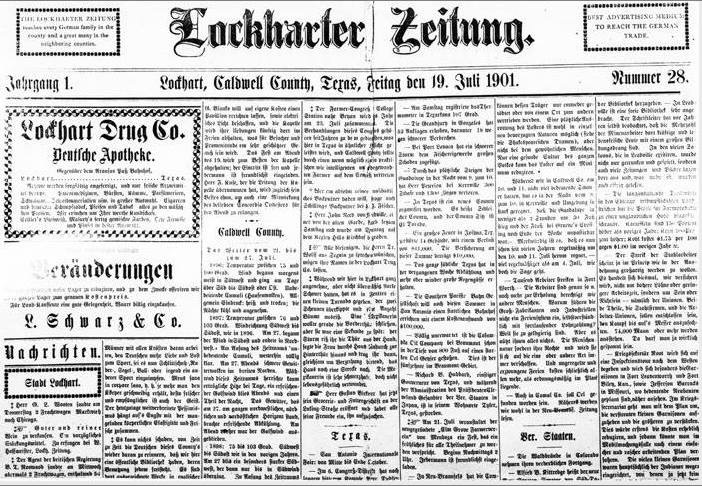 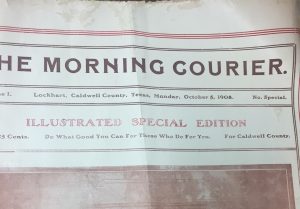 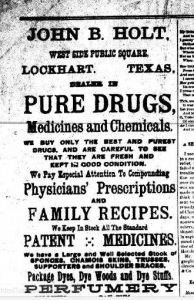 Ownership changed several times over the years. J. P. Bridges became publisher in 1878.[83] He would later relinquish the Lockhart paper and buy the Luling Signal, which he would publish until his death in 1893.[84] Brenham’s Weekly Banner of May 28, 1880 had a small story regarding the New-Echo’s ownership: “W.R. McDaniel has retired from the Lockhart News-Echo and W.B. Smith, an ambitious and rising young lawyer will [?] Echo-News to the people of Lockhart and Caldwell County.”[85] 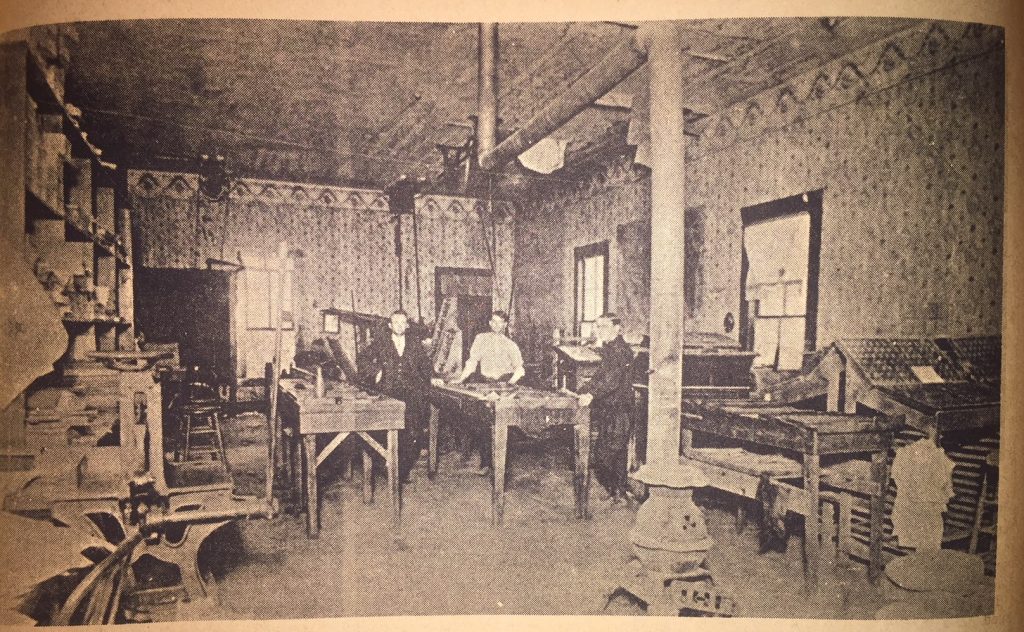 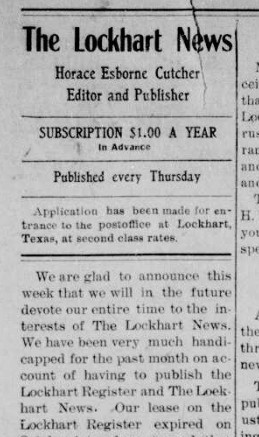 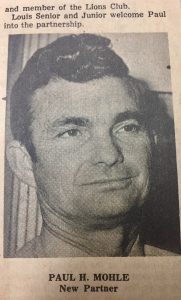 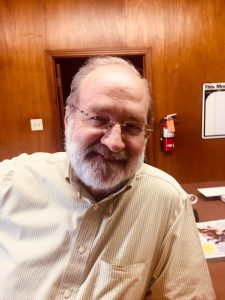 There are three other publications not included in any depth in this story. They are the Lockhart Guard, the Baptist Visitor, and the South Texas Baptist, all purportedly printed or published in Lockhart. Other that brief mention, nothing has discovered regarding their existence.  I have little doubt that there may have been other newspapers that existed briefly. Only in recent years have attempts been made to preserve newsprint in digital form. Sadly, some outstanding writing, excellent reporting, and brilliant opinion pieces have been lost.

[54] Annals of Travis County and of the City of Austin (From the Earliest Times to the Close of 1875) by Frank Brown. Vol. 9. Date unknown. Carleton (or Carleston, as it was spelled elsewhere) would have been thirteen years old at the time of the Texas Revolution.

[61] American Newspaper Directory, containing Accurate lists of all the newspaper and periodicals published in the United States and Territories, and the Dominion of Canada; Geo. F. Rowell & Co. (1870).

[77] Houston Post (Houston, Texas), Vol. 25, Ed. 1, December 13, 1909 states that the Lockhart Herold (sic) made its appearance that week as the first German paper to be printed in Caldwell County. There is no further evidence of this publication’s existence. It certainly would not have been the first of its kind, if it even existed.